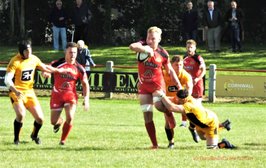 A try deep into injury time from Redruth skipper Sam Stevens gave the home side an opening day win against a determined Esher side in a game where defences were generally on top.
It was a result that pleased a very relieved Redruth Director of Rugby Nigel Hambly. “I am delighted to snuck a win there at the death, I think both sides defended well for the whole match, there were very few clean cut opportunities for either side, but in the end we backed ourselves to go for the win when we could have gone for the posts to get a draw.
Hambly still feels his side is very much a work in progress. “I will have a good look at the DVD but my initial feeling there were too many errors especially in some of our set play, but it’s things we can work on and put right. The plus for me was the boy’s attitude and willingness to work hard for each other and never say die attitude. It’s a good start but we have work to do ahead of our trip to Taunton next week.”

From the kick-off the game quickly became a stalemate in mid-field with neither side able to find a breakthrough amidst some stern tackling.
A promising move from Redruth involving Lewis Vinnicombe, Richie Kevern, Brad Howe and Matt Shepherd came to nothing as they were turned over.
Scrum-half Jack Oulton looked to inject pace making good ground.
Howe’s strong drives certainly caught the eye of visiting DoR and former England & Lions player Peter Winterbottom.
We had to wait until the 36th minute for the first points. Redruth managed to rip the ball from Esher in mid-field, Shepherd set off on a powerful run before timing his pass to the flying Vinnicombe to score in Hellfire corner.
Fraser Honey couldn’t add the extras in the tricky wind so the score remained 5-0 up to half-time.

Honey kicked well, putting the Reds into several promising positions but sadly Redruth couldn’t take full advantage.
Esher began the second half well with both wings Tom James and Martin Freeman looking lively.
Kevern worked tirelessly at the breakdown, turning over some good ball, as did the back row of Howe, Stevens and Mark Grubb.
The visitors pressure was finally rewarded when fly-half Gus Locke knocked over a penalty to bring his side back to within two points.
Esher certainly had their tails up and went looking for another score and finally turned the pressure into points from a catch and drive thanks to an unconverted try from hooker Delvin Hope in Piggy lane corner.
It looked like it might have been enough for the visitors to sneak the win, but Redruth were determined and piled on the pressure during a lengthy period of additional time, eschewing a simple kick at goal to tie the game to go for the win, their ambition paid off following multiple phases when Stevens squeezed over with the final play to the delight of the Redruth faithful.